Get behind the Daffodil – Marie Curie Great Daffodil Appeal 2016 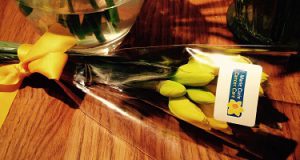 Exciting news this week as I have been working behind the scenes with Marie Curie & Covent Garden Flower market to promote the Marie Curie Great Daffodil Appeal in March.  This year we are encouraging all florists to sell daffodils and to make a donation to the charity – I am delighted that we have received support from Paula Pryke OBE and renowned Event florist, Shane Connolly.   Also Gill Hodgson who is widely known as the Voice of British Flowers was delighted to hear we are supporting not only Marie Curie but British Flowers too!   Here is what’s been said in support of the initiative:

No-one truly appreciates the extraordinary work of Marie Curie Cancer Care until they experience it in their own lives.

Marie Curie nurses cared for both my parents in the last weeks of their lives and I will never forget them, and the calm dignity they brought to such a difficult time.

My debt to them is beyond measure.

And so I was thrilled to hear of this new initiative to commemorate the 30th year of the Marie Curie Daffodil Appeal by having Florists around Britain sell British Grown Daffodils and donate some of the profits to Marie Curie.

I strongly feel that it’s our duty in the industry to make the public more aware of British Grown Flowers.

To be able to do this, and help raise funds for Marie Curie at the same time, is an opportunity not to be missed.

I urge all British Florists to commit to this wonderful initiative and help raise awareness of two such worthy causes.

“Everyone loves spring flowers and the daffodil is a quintessential British flower.

We are delighted to be involved in raising money and awareness for the invaluable work that the Marie-Curie charity does. Let’s make the 30th year of The Daffodil appeal the best fundraising year to date!”

‘I was delighted to hear about Chez Fleur’s idea to join the Marie Curie Great British Daffodil Appeal by selling British daffodils , it’s a great way to promote British flowers and get involved with such a brilliant charity.   We’ve Mother’s Day and Easter in March and if lots more florists get involved and commit to donating a small part of their profit for every bunch of daffodils sold it could make a very real difference to the appeal this year, and every year!’

So please buy your daffodils this year where you see the Marie Curie sticker and support this valuable charity and British flowers at the same time!   A cheery bunch of these lovely Spring flowers are a joy to receive and with Mother’s Day on Sunday 6th March they make an ideal gift.  I will be selling my daffodils at Cuckfield Local Market on Saturday 12 March and they will be available at Wealden Stores each weekend throughout March.